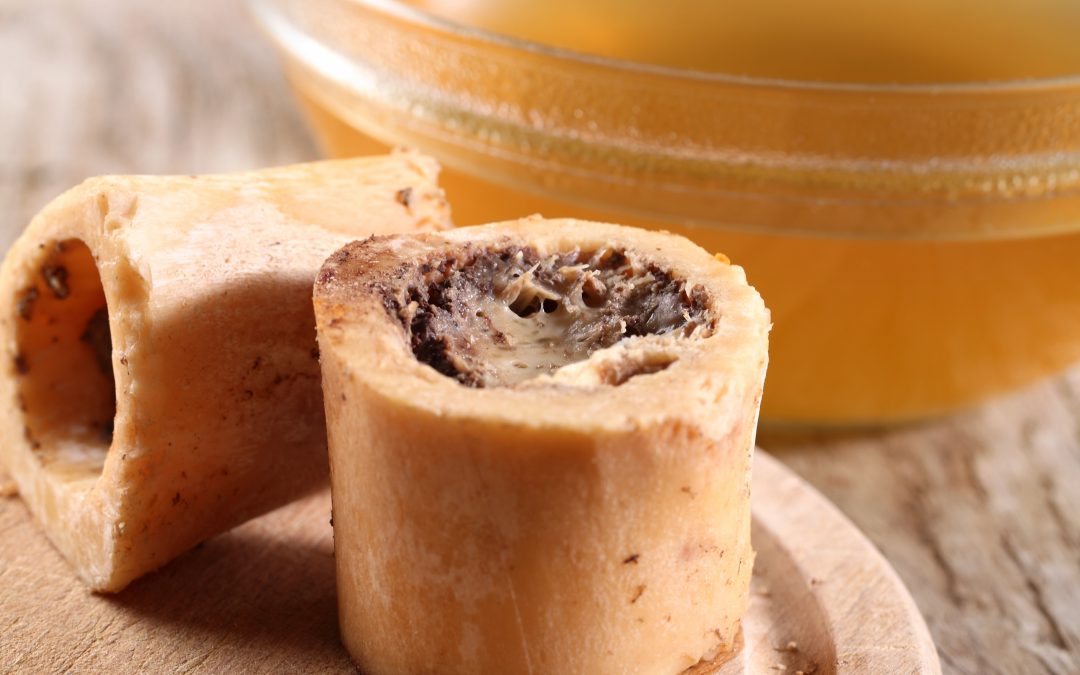 There is more than enough information and recipes on the Internet and books about making a good bone broth so why should I add one more? I’ve put off writing this out as it is so simple and I honestly thought that no one would be interested but I’ve several requests now so thought I’d compile it in the one place – my website.

I’ve been doing broth/stock for many years – that’s nothing new. However, I previously used the slow cooker which I did NOT like due to the time and smell. I’ve used stovetop, slow cooker, and pressure cooker (Crock-Pot Express or CPE) but I achieve the best results with the pressure cooker or InstantPot for those in the US.

The batch pictured below was made with grass-fed chicken wings and necks – grass-fed does make a difference. If you can afford it, it’s worth it!

I used my Crock-Pot Express Multi Cooker – cooked on ‘soup’ setting for 2 hours. Add bones (raw or roasted) to the CPE or IP along with 2TB ACV, some herbs and spices. Add some halved carrot, celery and onion. Add bay leaves, herbs – whatever you have in the fridge!

When using the pressure cooker I don’t see the point of soaking the bones in the ACV as the machine takes awhile to heat up before it starts cooking so I count this towards my soaking time.

Cook on high pressure for 2 hours. Natural release, strain and put in fridge. After straining, I add some 1-2 TB of collagen and 1TB gelatin. Not to cheat for the gel rather for the health benefits. That’s it, that’s all I do.

Some general notes on broth straining

For fatty bones, cook the bones ( roast them) to render out any fat first, then make the broth. After making broth, there are a few suggestions for straining off all the fat, which is helpful for fat straining but also if you are particular about what you eat but aren’t able to eat grass-fed/organic. Those suggestions are to:

Chill the broth and skim it. Then warm it just enough that it is pourable. Fill a strainer full of ice. Then pour the broth over the ice. Any remaining fat sticks to the ice and the broth goes under into the container.

Line your pot with cheesecloth. Then simply pull up the cheesecloth, bringing all the bones, etc. with you, leaving broth.

However… I don’t strain using those methods suggested above – but they are great suggestions. I use tongs and a large spoon to get out as much ‘stuff’ as I can and then I pour the liquid though my nut milk bag, which isn’t really a nut milk bag but a paint straining bag that I buy cheaply from the hardware store.

After straining I cool it and then scrape, lift off or remove the fat. If it was organic or grass-fed bones I’ll reuse the fat for cooking otherwise I don’t use it because fat stores toxins. Then I bag it up and freeze it! Done!

Then it can be used in soups, casseroles or wherever broth or stock is used in a recipe. or I drink it daily as a warm drink. I add 3/4 tsp of mineral salt, and ¾ tsp of Trim Bouillon Mix to 1 cup broth. Delicious at any time of the day but especially for breakfast and just before bed. 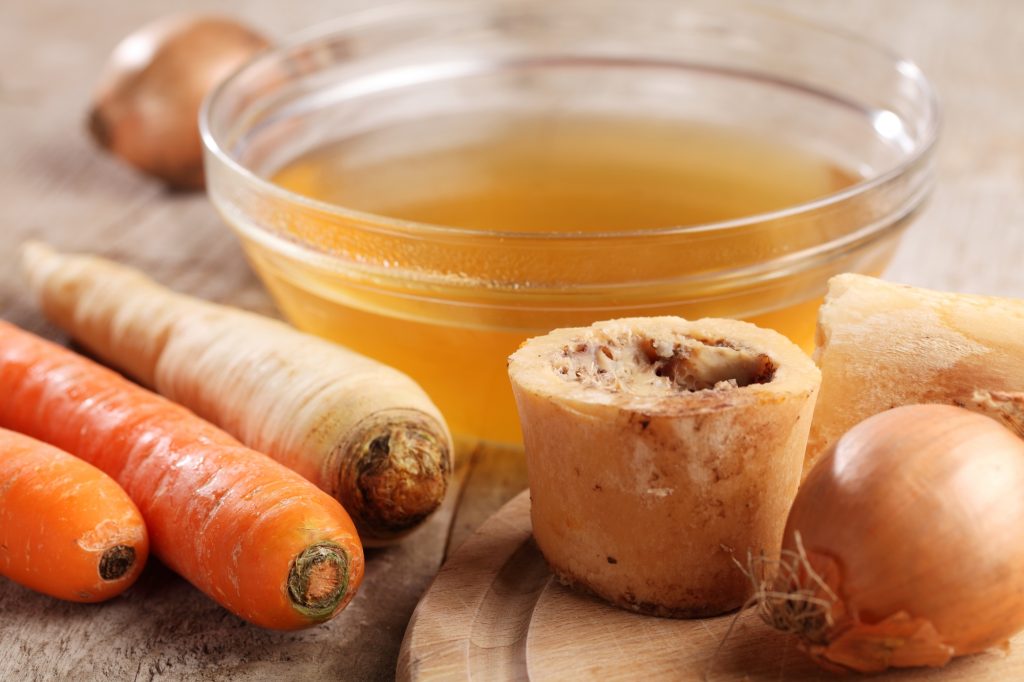 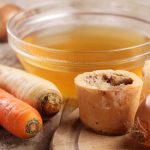 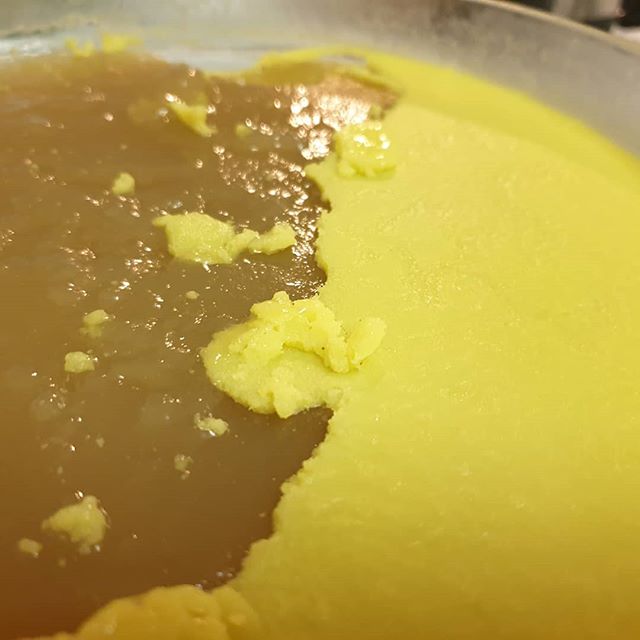 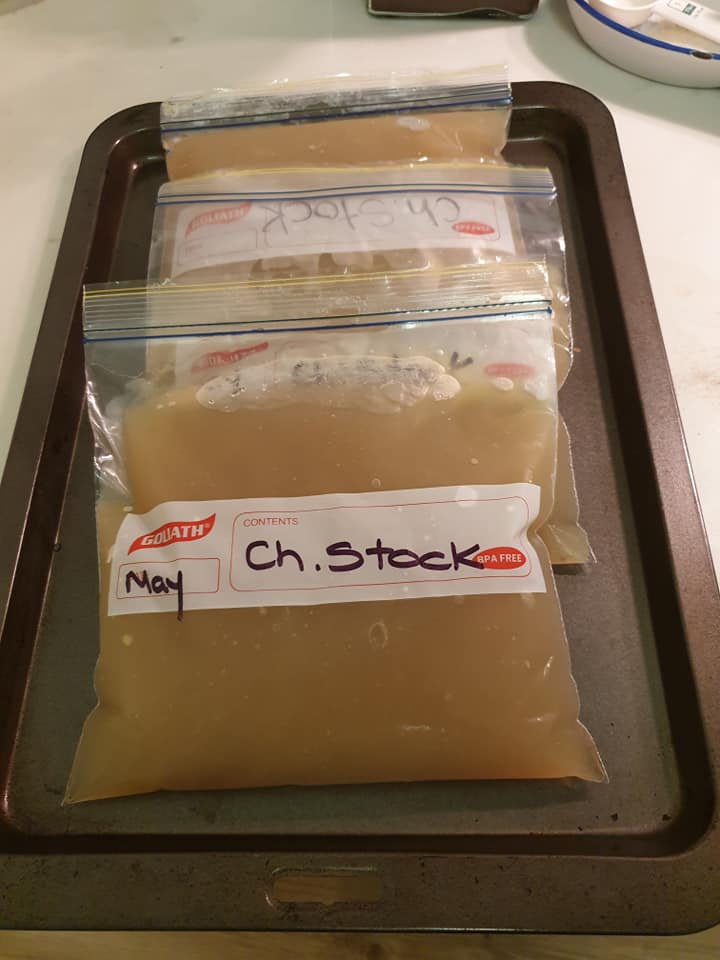